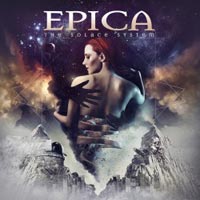 From the get-go, this EP does not feel like a filler release. I mean, the six tracks in “The Solace System” are neither different takes of already released songs, nor bonus material which did not make it in the latest full length “The Holographic Principle”. According to what EPICA have said in the ‘making of’ videos for this EP, these are songs that could not fit into “The Holographic Principle” due to time restrictions unless the plan was to release a double LP. Ok, there must have been a market-related decision, since EPICA are already on this side of the Atlantic, so having a new material out helps to keep the band on top of the US audience newsfeed.

Of course, the reasoning behind such as release is irrelevant as long as the music included is as awesome as “The Holographic Principle” turned out to be. Otherwise, characterizing this set of previously unreleased songs as a filler would have be an inevitable conclusion. Fortunately, EPICA prove to be in a killer music-writing mode with both “The Quantum Enigma” and “The Holographic Principle” being amazing records. Ok, the title track of the EP may come as a bit simple as compared to the thick compositions the aforementioned albums have, but still, sounds fresh and heavy with Simone on top of her game. The heavy guitars, the hard-hitting bass and the almost whispering harsh vocals make a powerful song with a modern twist in the riffs. “Fight Your Demons” is closer to “The Holographic Principle” with the pompous orchestration, the fast double-bass drumming and the operatic singing backed up by the choirs which put the word ‘epic’ in capital and bold font. The riff-break along with the symphonic arrangements are EPICA trademarks, so if you like the last full length LP, then you’ll see how this song was created during those music-writing sessions. I think that EPICA have gained more heaviness with the last two LPs by using more aggressive riffs and double-bass breaks which fit perfectly the growling vocals. Of course, this was not done at the expense of the melodic / epic parts where Simone really shines, and this exactly what is going on in my EP favorite “Wheel Of Destiny”. The combination of the opening riff and the fast snare drum action is prefect for headbanging and make a killer contradiction to the melody carried by Simone’s singing who delivers the goods during the catchy chorus. I think the biggest success of EPICA is making the mix of Symphonic and Metal extremely smooth in a way that one complements the other without sounding like putting stuff together and hoping everything to work, and this song is the perfect proof of this.

The guitar-based ballad “Immortal Melacholy” seems to be the weakest link on this six-part chain and the main reason for this is that it does not fit the rest of the faster and heavier tracks. I guess, if it was delivered as part of a concept, would have made more sense to me. Still, the medieval undertones in the guitar arpeggios along with the powerful singing will definitely please lots of EPICA fans. If I had to pick one song to be included in the “The Holographic Principle” tracklist that would have been “Decoded Poetry”. The epic choirs/orchestration, the fast breaks and Mark’s growling, combined with the Thrash-y riffs, are what I love in the recent EPICA releases. Just listen how this bleeds into the almost Gregorian choirs around the middle section before putting the pedal to the metal with faster drumming and galloping guitars - just awesome!

The choice of releasing this material in an EP form instead of keeping it for the next album proves the level of song-writing confidence EPICA possess, and I am sure good things will be on the making, once the Dutch decide to come back to the studio. In the meantime, you should check the band live in any given chance, because they are definitely on a winning streak.

Epica @ The Forge, Joliet (US)