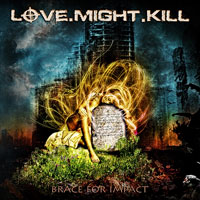 LOVE. MIGHT. KILL. Is a multinational melodic Metal band with members from Italy and Germany. The drummer Michael Ehre founded the band. He has played with METALLIUM Uli Jon Roth and FIREWIND. There are a couple pinch harmonic squeal containing songs, but that is a minor complaint. This album harkens back to the past century and captures the sound of the mid 90’s. While the album is nothing even close to progressive Metal, it is very complex and intricate. The music is hard to classify. The squeals are completely out of place for this type of band. You normally get sounds like that from much heavier music. It is hard to understand where the sound from this album comes when you think of the bands the founding member has played in. It’s far more commercial than FIREWIND or METALLIUM, but by the same token, it is not hard rock either, it is Heavy Metal. Though not mentioned as an instrument on the bio sheet, the band definitely plays the keyboards.

The guitar solos are top notch and melodic. They have some serious fret board mastery involved. The production values are very good. The band is full of accomplished professional musicians. I am sure if given a shot, there will be a market for the band. The drummer has exceeded in this band what he has previously done. I am sure weirder things have happened. At times the band does flirt with power metal, but not enough to qualify them as that type of band. The song “Calm Before The Storm” is certainly a Power Metal song. It includes some rapid fire drumming and great vocals and a memorable chorus along with a very frantic dual guitar solo. It is a shame all the songs aren’t this good. “Pretty Little Mess” opens up with an excellent riff and shows off some very good writing and playing. There is also a secondary riff that is very good as well.

This band might be just a project, but then again the drummer seems to be free of any other commitments at the moment. METALIUM is quitting this year. Gus G from FIREWIND is playing with Ozzy, and Uli Jon Roth doesn’t seem to be using him at the moment. It might be a good idea to keep this band as a permanent entity for as long as possible. Judging by the high quality of this band’s music, I believe he can tour and be successful with this band. I was going to rate this album lower, but then I did what I always do and played the album at least two more times. It grew on me as so many albums do. I am sure you know what I mean. You listen to something and turn it off thinking it was a letdown, but then when you play it a few more times you change your mind and think, “Man, this is pretty good after all”. That is indeed the case with this album. The more I listen to it the better it gets. I firmly believe there is a Hard Rock radio single or two on “Brace For Impact”.

There are some really classic moments on this album. This record showcases some great guitar playing, great vocals and song writing. I have to recommend this band’s new release to the melodic Metal fans. The pinch harmonic squeals are only in two songs, so it is enjoyable even by a guy like me that hates that sort of thing. Give this new band a shot.