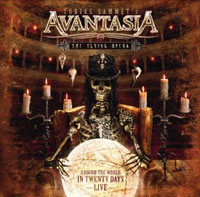 I was never fan of EDGUY and hence I kept a distance for Tobias’ doings leaving aside his project named AVANTASIA. This was not a smart move since Tobias under the AVANTASIA moniker has released great albums especially the last three where he 100% implemented the term Metal Opera. In these albums the guest list is impressive while the songwriting is focused in every guest singer making the result absolutely amazing. So, after three great albums AVANTASIA put together a hearty DVD/CD release packed with music and bonus material to sink your teeth in. The subject of this review is the double CD version (the audio part) of this release and consequently is focused on the music.

It is an extremely difficult project to get AVANTASIA’s music onstage because there are many different elements present and just a good production can really mess things up. And not to mention gathering most of the guests on the same stage… So, having to review just the audio version of the release gave me the chance to be disconnected from the visual side of the show and really ‘see’ what is happening behind the soundboard (you know what I mean of course).

From the very beginning it becomes clear that the sound production and mix is great doing justice to the music but also giving some space for the fans to be heard. And this is great you know; you cannot have a ‘live’ recorded album and use exclusively the soundboard feed. If the cheers, the clapping and the singing along are hard or even impossible to hear then to my understanding it is not a genuine live recording. Also, I hate when a live album is being heavily re-worked in the studio and not to mention re-recording parts especially the vocals. I am not a sound engineer but I am sure that there was not too much work in the studio and Tobias seems to have left the vocals as they were originally recorded. You can hear him addressing the crowd and in times overdoing the higher pitches but, as I said, this is how it should be.

The presence of guest of musician keep an additional energy boost in the band’s set having as highlights the amazing “The Scarecrow” with Jorn Lande, “The Toy Master” with Kai Hansen doing a great job stepping the role of Alice Cooper (also Henjo Richter in the guitar), “The Story Ain't Over” with the amazing voice of Bob Catley and the piano driven “Inside” with fitting vocals by Andre Matos. The list can go on, since the album is bursting with high quality performance and it is funny to say that Tobias is the weakest link here. But, he does a great job with the crowd so a couple of singing mistakes are easily neglected. After all, singing live non-stop has never been an easy task. You can feel his onstage energy in the piano based “Inside” and in the groovy songs “Shelter From The Rain” and “Reach Out For The Light” while the band’s hit “Lost In Space” sounds great. I have to acknowledge the backing vocals (there is also Amanda Somerville here) that have a more dominate role and add depth and melody to the leads.

This is a great live recorded album with a setlist that flows smoothly (even though there are different recording sessions) and a sound production to blow your socks off. I will definitely get a copy of the DVD version to get the full visual/audio treatment. I am really curious to see what will AVANTASIA’s next step will be although Tobias has already announced that a new EDGUY album is on the way so it might take a while. In the meantime you can absolutely enjoy this one!