Tyr - The Lay Of Thrym 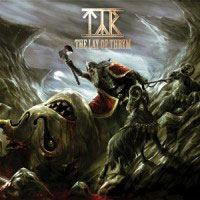 The band from the exotic Faroe Islands just released their 6th studio album…woah, I can recall TYR offering their debut back in 2002 and receiving a general positive feedback due to their combination of epic Metal melodies with Viking/Northern Europe harmonies, without placing their name in the ‘extreme’ Metal typhoon of that times. Nine years have now passed by, the band gradually broadened its fan base - they seem to be guys with a positive aura, too - and “The Lay Of Thrym” is now added in a series of notable albums ready to deliver the goods and feed your hunger.

The title of the album happens to refer to one of the most known poems from the so-called Poetic Edda (a collection of Old Norse poems primarily preserved in the Icelandic mediaeval manuscript Codex Regius - source: Wikipedia.org), with the original title being “Þrymskviða”. The trademark TYR style is again present here, with Heri Joensen marching on with his heroic, melodic, sing-along vocal lines and the rest of the musicians filling in in a high-energy epic/Viking/folk mode. The songmaking - bearing enough similarities with their “Ragnarok” ‘hit album’ era - still stands proud as a result of neat scope and loyal faith to this style of music, and that’s not something we should neglect the last years.

Not being a core fan of this genre, truth is TYR’s melodies can again stick to mind, with the predictable yet joyful choir refrains adding a celebrating atmosphere. More mild moments also offer a tranquil intermission and we should not last but not least forget to mention the fitting production, bringing forth the intense warm voice of Joensen but not forgetting to put equally the rest of harmonies in a respectable position.

If you always respected TYR’s aim, then “The Lay Of Thrym” is not the kind of album to let you down. It lasts for nearly an hour, an hour you can spend without hesitation to fill your needs, and I think this CD adds a new remarkable tutorial to the quartet’s expertise. It has tempo variety, metalized riffing, Feroese gentility, a lucid sound and – above all – makes TYR to hold their head up. It cannot be revolutionary but it surely tastes good. Ah, and you cannot possible resist singing to the choruses’ vibe... again.

P.S.: Two bonus cover takes are made in memory of the one and only Ronnie James Dio. Both delivering the goods as requested.

Satyricon @ The Forge, Joliet (US)