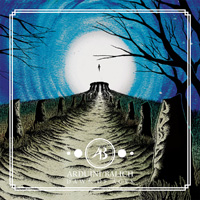 Balich, Balich, Balich... Where have I heard that name before? Ah right, Brian Balich of ARGUS! Ok, then the ARDUINI / BALICH record “Dawn Of Ages” is necessary to check out. US Doom cult ARGUS have really impressed me with their albums. Especially their second release “Boldly Stride The Doomed” which holds one of the best songs ever written; yes, “Pieces Of Your Smile” is a sick and twisted epic piece of music. Brian’s deep and dark tone goes straight in and generates a fateful atmosphere. Victor Arduini also felt familiar but I had to check him up before realizing where he comes from. As a founding member of FATES WARNING, one of my absolute favorite bands, that added yet another level of curiosity regarding the “Dawn Of Ages” release.

As Brian’s characteristic voice is on this music and we are talking about Epic and Dark Doom / Heavy Metal, it’s hard not to refer to ARGUS. It’s not exactly the same but there are definitely similarities. So, if you’re a fan of ARGUS, this one is a must - if not, it’s still worth checking out since it’s a damn cool record. The long “The Fallen” epic opens the record. The TROUBLE-type groove strikes hard and the song has a fantastic drive. If being petty I would have loved a little more edge on the guitars. I mean, the muddy sound works, but it would have been even more powerful with a bit more edge. The melody, harmonies and slow-gnawing beat in “Forever Fade” sends shivers down my spine every time I hear it, that intro is phenomenal and when it takes off, it’s hard to stand still. The song is taken down again in the mid-section and I really like odd structures like this in songs. Still, it’s a bit of a waste to only use that fantastic melody in the intro.

“Into Exile” is another long and massive track, which most on the record are. This one floats smoothly over all the different pieces it’s easy to get lost and the mind starts to wander and dream away. It’s dynamic and dramatic again a perfect fit for Brian’s voice. Also, the old school FATES WARNING oddities can be traced here and it all comes together as a fantastic piece of music. And it’s easy to let the mind wander when listening to the ARDUINI / BALICH; the long epic songs with layer after layer and the slow gnawing beats tend to do that. So if you expect “Dawn Of Ages” to be a party record, you will be disappointed. But if taking it in for what it is, you’ll be looking at a masterpiece. “The Wraith” though holds a catchy chorus-line but is hardly a party-song. The desperation and gloom in the song really draws one in like a lullaby sends a child to sleep and it all sounds amazing.

And what is the most fascinating with the “Dawn Of Ages” album is the fact that the song structures are odd, the melodies and harmonies are odd, rhythms and beat are odd, but it still feels like a consistent composition; it feels very accessible even without real choruses and repeated parts in the songs. And this is what makes it a masterpiece for real.

Argus - Beyond The Martyrs