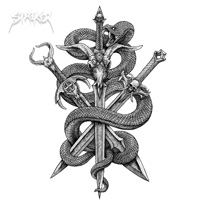 Most of the times, when a band chooses to release a self-titled album, it is for two main reasons: a) wants to reintroduce the band’s roots (aka return to the original sound), or b) wants to make a statement that this album is the most representative material hence it’s connected to the band’s name (or the greatest... well, hmm, till the next one). In the case of Canada’s heavy metallers STRIKER, I really dunno why they chose to title their fifth studio effort under the “Striker” moniker, since neither of the two aforementioned situations applies; sure, it’s a kick-ass record, but I can’t say if it is a re-introductory, or their most representative one. So now, let me explain why.

There is no doubt that STRIKER is a hard-working and passionate band; over the course of their career, they’ve released five albums, with the latest two being independent releases under their own label, Record Breaking Records, and have countless shows all over the globe written in their Metal CV. But it seems they wanted to bring forward a ‘80s-Hair Metal-inspired (of the “Top Gun” era) simplicity to their music, mixed with some modern finishing touches that would make the overall result more enticing - the kind of simplicity that, in a way, would take their sound towards a more open (and commercial) fan-base, while mainly focusing on the power of the riff. Yeah, there are tons of powerful riffs in “Striker”; just push the ‘play’ button and let opening track “Former Glory” unleash its in-concert mood or enjoy at maximum volume the Lemmy-motto-laden “Born To Lose”, where you can find one of the be(a)st singalong choruses STRIKER have written. As always, Dan Cleary’s vocals are powerful and fitting like hand-in-glove to the high-energy STRIKER tunes, and in many cases steal the spotlight - like in the ANTHRAX-esque “Shadows In The Light” or in the Arena Rock-infused “Rock The Night”. Especially the latter feels a bit weird for a STRIKER track, but it’s catchy enough and easy to swallow, like the storming “Over The Top” following the ‘big drums, big vocals, big (and slightly modern) guitars’ recipe.

In case you’re in for something closer to the STRIKER roots, “Freedom's Call” with the RUNNING WILD-like riffage will do the trick, even though the guitars-complexity of the band’s past is missing, but overall we’re dealing with a pure Metal and brilliant set-up track that passes the STRIKER spark testing with flying colors. The same goes for “Curse Of The Dead” that drops the curtain with a bang, and I can already see this one as the ultimate crowd-pleaser for the arena-gathered metalheads in the upcoming STRIKER shows.

To sum things up, “Striker” definitely does not re-invent the thrashing wheel for the Canadians, so you’re not gonna find a ground-breaking release here, but if anything, it’s a pure, no-bullshit Metal album that guarantees tons of fun while listening to it, either it’s with a cold one on hand at your nearest venue, or inside your car driving away the (last) winter nights... You can’t have a bad time with this one. Recommended.

Striker - Stand In The Fire