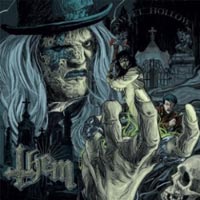 For any true Metal maniac, the band name THEM should immediately bring KING DIAMOND to mind. The band was formed as a KING DIAMOND tribute band back in 2008, so there should be no surprise that we’re talking about straightforward KING DIAMOND influenced dark Heavy Metal. But it’s more than just a simple cover-band; even if THEM’s music sounds a hell lot like King, the skill these guys possess, when it comes to songwriting, is really impressive. And looking at the lineup, we’re not talking about beginners here. I mean, Mike LePond normally roams in SYMPHONY X, Kevin in SUFFOCATION, Troy in COLDSTEEL and so on. So, musicianship leaves more to wish for.

And from the first spin of THEM’s first full length album “Sweet Hollow”, I got hooked. The “Rebirth” intro sets the mood immediately and the fantastic riffs and melodies which follow with “Forever Burns” are really top-notch. The time-changes and variation in intensity, rhythm and atmosphere are simply fantastic. The take-down before the chorus and a slight let-up before it all takes off. The phrasing and beat in the chorus-line are for sure one of the best things ever written. “Down The Road To Misery” is fast one following the steps of the previous one. I’m a sucker for mid-tempo choruses and that’s what we get here. The chasing feeling in the verses is almost stressful, that’s how vibrant the performance is.  The little mellower “Ghost In The Graveyard” comes in as a nice break; again, the melodies are fantastic but what really stands out is the Epic, Doomy chorus-line… Countdown 3-2-1 part, I mean… The harmonies, the vocal lines which are off-beat but so damn right. It doesn’t get much better than this. Unfortunately, the “Sweet Hollow” record loses the intensity a bit with “The Quiet Room”, which feels like a passage or intro to the next piece of the record. “Dead Of Night” is a very good track, the chorus is very catchy but it’s rather easy-going when compared to the earlier songs on “Sweet Hollow”. Though, anything but easy can be said about the bass line behind those last few choruses, damn...

Wallowing in other people’s misery the theatrical intro of “FestEvil” invites the listener to the freak show. Again, a dark and Epic track but this time MANTICORA’s “Black Circus” comes to mind rather than KING DIAMOND. It all sounds fantastic but I could really have taken an up-tempo track in between these heavy ones. The faster ones come of course with “Blood From Blood” being a really aggressive piece and the rhythm of the guitar-picking has resemblances with ICED EARTH. That combined with atmospheric passages works extremely well. Also “The Harrowing Road To Hollow” (which was the last one on the promo) is also a speedy one and I’ll be damned if THEM didn’t catch that typical MERCYFUL FATE attach and groove in the verses. The album closer “When The Clock Struck Twelve” ends “Sweet Hollow” in the same fine way as it started; it’s technical, dark Heavy Metal with a great sense of melody although the chorus is not as striking as it was in the first few songs of the album.

The fact that this is a concept album didn’t come across for me during the first few spins. I normally don’t read about the releases, I just start listening and it took a while to realize it actually is a concept album. Not that it matters as the songs work incredibly well stand-alone too. And even if “Sweet Hollow” is a fantastic album straight through, I don’t think it reached the same class again after those first three tracks (minus the intro), those three, “Forever Burns”, “Down The Road To Misery”, “Ghost In The Graveyard” are among the best things ever written, if you ask me. And by all means, “Sweet Hollow” sure beats “Give Me Your Soul... Please” (and perhaps a few more also), so while waiting for KING DIAMOND’s next masterpiece, this will do very well.