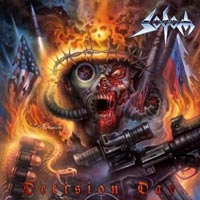 I think it wouldn’t be a shocking surprise if I told you that SODOM is one of those bands that can put a record out without trying much. I mean, they can simply follow the recipe they have been using all these years and still present a pretty good album. So, the one million dollar question is whether “Decision Day” is another ‘safe’ album, and I am happy to say it is not. In fact, I will go beyond this and use the cliché phrase ‘SODOM are back’ and let me tell you why.

First of all, both “Epitome Of Torture” and “In War And Pieces” were very good albums so - like I said - I didn’t expect something out of the ordinary; just another SODOM album with songs that may last until the next one. I guess, this is my issue with albums from some of the bands I love, and that is the absence of songs that will stand the test of time and make you wanna headbang every time. But this is not the case with “Decision Day” that shows its sharp teeth from the get-go with the awesome “In Retribution”; the short intro does not reveal the molten Thrash that starts pouring out in huge volumes after the fast drum-roll which sounds the charge for the killer riff. Of course, the snare-drum takes over and leaves Tom’s vocals as the icing on the cake. His vocals have a “M-16” or even “Agent Orange” low-register quality that will definitely wake lots of headbanging memories. The album’s production helps a lot because the music coming from the trio sounds raw and live, so the urge to headbang and mosh is impossible to resist. Keep in mind that this song clocks 6 minutes and it is awesome from start to finish, although my favorite part is the rhythm section behind the Hanneman-inspired solo. “Rolling Thunder” sounds like a steamroller crushing everything in its way with an impressive volume coming from the drums and I’m sure you’ll be grunting the chorus at no time. What I always like in SODOM is the epic layers hidden behind the German Thrash norms and the way the lyrics touch upon war-history themes (the D-Day in this case). Just pay attention how the chorus works in the album’s title track but be ready for another moshing-break with the double bass-drum action. “Who Is God?” quickly became a favorite and I will credit the fantastic rhythm guitars that carry the SODOM-trademark sound with pride and I am sure you’ll enjoy Tom’s deep scream that lies in place of a chorus. Speaking about the vocals, I think they are partly responsible for the album’s back-to-the-basics atmosphere because to my ears, Tom sounds like a teenager shouting and screaming to the microphone until his lungs explode. Ok, I may be over-selling this but what I am trying to underline is that SODOM sounds refreshed and re-energized.

There is absolutely no way to resist the in-your-face attitude of the mid-tempo “Strange Lost World” where the bass adds an extra oomph to this massive piece and this set-up kind of bleeds into the following “Vaginal Born Evil” with the higher bpms and the killer chorus lines. I can easily be caught into a track-by-track commentary here because there is absolutely nothing weak in this fine piece of Thrash. In fact, one of the favorite songs is the bone-chilling “Refused To Die” with the Latin spoken part, Tom’s grunt from the past and the headbanging tempo with the dominating bass lines and the yet-again neck-snapping riffs.

SODOM have managed to wake many great memories but they did not do this in a nostalgia-way. “Decision Day” sounds inspired, energized and with the bass-driven attitude (VENOM and MOTÖRHEAD inspired, of course) we learn to love since “Persecution Mania” (SODOM’s Black Metal past is a way different discussion but equally awesome). So, if you are an old SODOM fan, “Decision Day” will bring tears to your eyes, and if you are young, it will teach you everything you need to know about the German Thrash.