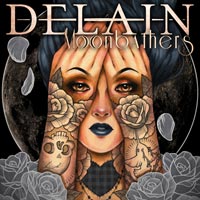 Yeah, probably it’s unnecessary to underline that DELAIN is one of the most endearing female-fronted Symphonic Metal bands in the fans’ age range between 16 and 26, and not only because they’re hailing from the Netherlands, the home of so many successful Metal acts of the same ilk (like EPICA, WITHIN TEMPTATION, STREAM OF PASSION and NEMESEA) or due to their sweet presence of Charlotte Wessels behind the mic, but because their star began to shine around 2014, with the powerful and interesting “The Human Contradiction” album that, for me, was the main motive to start dealing seriously with the Dutch. After 10 years of a steadily rising career, four studio albums and a huge US tour supporting NIGHTWISH, DELAIN are back in discography and celebrate their successful course with their fifth full length release, titled “Moonbathers”, so let’s see if the six-piece will continue adding victorious arrows in their music-quiver.

From the moment the album opener “Hands Of Gold” steps into the limelight and fills the room in an instant with its Symphonic Pirates Of The Caribbean-like intro (yeah, you’ll get that late-NIGHTWISH-esque breeze), you’ll feel that DELAIN are serious here; not that in their previous works they weren’t, but now the air feels more dynamic and mature than before. Sure, the chorus is quite catchy and the guest appearance of Alissa White-Gluz in this track spices things up, but DELAIN seems to have built an entire different universe based on multi-layered keyboards for Charlotte’s vocals to step on, while the guitars aren’t too much heavy or epic-sounding, meaning that they don’t take the lead - even not occasionally. For many metalheads, this may be a turn-off but it’s impossible to not appreciate this band’s richness and epicness through the building-up melodies and the sensitive vocals that once again prove that DELAIN are gifted to have such a multi-talented front woman. The whimsical NIGHTWISH-feeling continues on “The Glory And The Scum” too, where the symphonic parts blend with the guitars (and believe me, this is the most guitar-driven moment you’re gonna get here), and it’s one of the most catchy tracks DELAIN have so far created - wait ‘till you find yourselves humming this one, let’s say in the shower... And it’s right about here where it lays the band’s success-recipe; I’m talking about their constant search in trying different things and not settling on a safe recipe, so yeah, DELAIN’s kindled spirit is written all over this track and over the following “Suckerpunch” where it’s already out there from February 2016 as the preamble single of “Moonbathers”, even though it feels like an earlier-written song than the rest of the album. Still, it’s an instant crowd-pleaser and if you had the chance to watch these guys live sometime in 2016, you already know this.

One more thing that makes DELAIN stand over many other band of this Metal genre, is the characteristic mix of symphonic and electronic elements. Take “The Hurricane” or “Danse Macabre” for example where Charlotte’s powerful yet sensitive vocals shine off; both are keyboards-laden, but still symphonic-infused tracks and this gal’s impressive reading adds more points pushing DELAIN to higher levels. Personally, I was a bit bored during the “Chrysalis - The Last Breath” ballad, but their take on QUEEN’s “Scandal” managed to compensate the damage, even though I missed Freddie Mercury’s intensity and edgy performing-charisma. Still, QUEEN is a truly difficult band to cover - it’s not news that Mercury is probably the most charismatic person who walked on this earth, but this is not the place or the time to elaborate on this. So, back to the album, DELAIN chose to drop the curtain with the same way they started, and this is by placing an epic orchestrated track in the end too, titled “The Monarch”. I’m not sure if this one feels quite connected to the rest of the album dynamic-wise, but still is a beautiful 4-almost-minute composition that carries a kind-of “Game Of Thrones” vibe on.

Did DELAIN succeed to overpass themselves and deliver a better album than its predecessor? Dah! Did they deliver their best-of-the-best effort? Hell no! Sure, the flowing riffage, the beautiful symphonic parts and the grandiose singing are there, but all the signs show that DELAIN didn’t break (their) ground yet, and by saying this I simply mean that big things are about to come. Grab the neo-Victorian-looking “Moonbathers”, enjoy the boiling tunes, stay tuned and you’ll see...

Delain @ The Forge, Joliet (US)

Nightwish @ The Rave, Milwaukee (US)