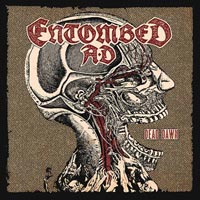 This is not the first and certainly won’t be the last time seeing a band splitting in two versions bearing different names just to avoid any possible litigations. Yeah, ENTOMBED A.D. is in fact ENTOMBED minus an original member, so your expectations should be the same no matter if there is an 'A.D.' attached. After all, music is all that matters and all the rest is up to the persons/lawyers involved and it is not up to the fans to choose sides or even having opinions of what should or shouldn’t happen to another person’s property. At the same time, it’s up to the fans to keep a band alive or let it disappear beneath the sands of time. Anyway, “Dead Dawn” is the second LP under the extended moniker and I’m happy to say that aside from the logo, nothing has really changed for the Swedes.

Sure, the keyboard-warriors/’I have an opinion for everything’ peeps will rush (or even worse comment on social media) to say that this is one of the same but to me this means that you get exactly what you were looking for. I mean, what different should anyone be expecting from this band other than pure Death ‘n’ Roll soaked in the Swedish Death Metal stew with a pinch of Sludge-ness in the guitars? Yeah, that’s exactly the deal here and is topped off by the characteristic growling by L-G that I think is responsible for branding this band’s Death Metal ID. “Midas In Reverse” opens the album and passes all the Death Metal quality controls with flying colors as it explodes with the fast drumming and the down-tuned riffs. The snare-drum action and the hi-hat sounds just before the sing-along chorus will give plenty of reasons to headbang, growl (with a clenched fist in the air) and dive into the mosh-pit without giving you a single heads-up. What I always like with ENTOMBED is that although their music is full of clichés it works absolutely fantastic almost every time and to me this translates into being reliable and consistent. The mid-tempo rhythm section of “As The World Fell” works like a charm and sounds heavier than any other faster and more-brutal song and in case you don’t know then write this down; this is the ENTOMBED (A.D.) way. “The Winner Has Lost” continues with the same neck-snapping groove and then throws some really nice melodic (almost epic) guitar leads which bear the Swedish Death Metal mark in all its glory - just awesome! The more brutal “Silent Assassin” puts the growling on the spotlight and L-G’s ability to sing extremely brutal but still make the lyrics totally audible (hate when the vocals come out as noise). The underdog of the tracklist is the ballad “Hubris Fall” with the creeping and ton-heavy rhythm section topped off with some clean guitar phrases (I got some “Seasons In The Abyss” chills here), more epic melodies and amazing singing (yeah, good growling is singing) that form a sick with the subtle keyboard sounds.

Maybe I have to rephrase what I said in the beginning because ENTOMBED A.D. are not just playing consistent and reliable Swedish Death Metal but have extended their sound, especially with the slower songs like the amazing “Not What It Seems”, with more sound effects that nourish the dark atmosphere present all around the tracklist. “Dead Dawn” will definitely meet your Death Metal needs and once your headbanging thirst have been quenched, you’ll enjoy the trip to the dark side...