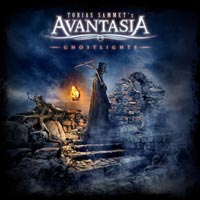 Albums with huge guest-lists are really tricky because the music composer has to take into account the different voices and put together songs that work with them. Sure, this can work the other way around and first write the music and then choose the singers to perform on them but I cannot think there is a universe where one can get the voice he wants. Anyway, Tobias Sammet has proven his worth when it comes to successfully completing such huge projects and personally speaking, he managed to lock my attention with the amazing double treat of “The Scarecrow” / “The Wicked Symphony”. “Ghostlights” is the title of his latest project that got me really intrigued with the stellar list of guests.

The rather AVANTASIA typical introductory song “Mystery Of A Blood Red Rose” slowly lifts the curtain of this theater-play with catchy and spirit-lifting melodies which have a lot in common with Tobias’ work with EDGUY. The usual suspect Jørn Lande lends his voice in the epic and SAVATAGE-like (blame the piano sounds for this) “Let The Storm Descend Upon You” that starts with pompous orchestrations and a massive sound. Jørn has an extremely versatile voice and can sing the softer and the heavier parts with equal power and a hard-to-miss timbre. This 12-minute epic track offers room for more voices, so WARRANT’s Robert Mason and PRETTY MAIDS’ Ronnie Atkins offer more colors in Tobias’ pallette and please pay attention how the guitar-vibrato part passes the baton to the slower clean guitar  part - just awesome! Brace yourself, because this rollercoaster changes moods and tempos at ease and reaches a killer climax during the guitar solo somewhere closer to the end. “The Haunting” directs the spotlight to a singer who I think has not received the appropriate credit although the music of TWISTED SISTER do not leave much space for Dee Snider to present his wide performing range. So, here he gets the chance to highlight his most theatrical vocals that fit perfectly to the mid-tempo and kind of creepy song and during the piano break I thought I was listening to Alice Cooper; yes, he is that good. If you know your Metal, then it is impossible not to identify who stands behind the mic as guest in the heavier “Seduction Of Decay”. Indeed, the multiple vocals and the way Geoff Tate moves from high to low register is impossible to miss. This song sounds like AVANTASIA but fits Geoff singing spectrum with a soundtrack-like epic atmosphere. And speaking of making songs to fit the vocals (or if you prefer choosing the right singer) then “Isle Of Evermore” is the ace on Tobias’ sleeve. The modern-sounding keyboards and moody melodies touch upon WITHIN TEMPTATION having Sharon den Adel handling most of the singing with her most expressional voice.

The crystal clear and powerful voice of Michael Kiske makes the Power Metal rocker “Ghostlighs” sounds ten times better (yeah, keep believing that he does not like singing Metal....) and then makes a powerful duo with Ronnie Atkins in the Hard Rocker “Unchain The Light”. On the heavier and faster part of AVANTASIA’s music spectrum stands “Master Of The Pendulum” that hits hard with the double-bass drumming and Marco Hietala’s singing who should ring the Big Ben if you’re into NIGHTWISH or maybe to TAROT. The album closes with “A Restless Heart And Obsidian Skies” where the slower tempo is compensated in terms of power via Bob Catley’s destined-to-sing classic Hard Rock voice. The way his singing fits the keyboard melodies is unique and has the classic quality of all those British Hard Rock and in case you don’t understand what I’m saying, check MAGNUM right away.

I have no reservations to say that “Ghostlights” is way better than the previous AVANTASIA LP, with a stronger theatrical atmosphere and great performances for characteristic voices that do not sound alien to the music. Everything was mixed into perfection and I really hope that AVANTASIA will soon expand their fanbase at this side of the Atlantic and grant us a full North US tour.