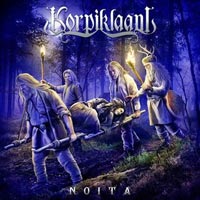 “Noita” marks the ninth full length album released by KORPIKLAANI and if you know some things about the Finns’ musical doings, then you shouldn’t be expecting something completely different from what they have done so far. After all, Folk Metal has distinct characteristics and elements that for some are (mistakenly) considered as signs of repetition. It’s like calling Thrash predictable when you hear the fast snare-drum action. Anyway, the Finns took more time to release a new LP when compared to previous album-release-rate and that’s perfectly ok because in the end of the day if there’s a music-writing drought, then waiting is the best option.

In case you’ve been living under a rock and you have no idea what’s KORPIKLAANI’s deal, then the album opener “Viinamäen Mies” will tell you everything you need to know. The hey-heys, the mood-lifting violin and accordion melodies will set the dancing and drinking mode at no time and I am sure you’ll try to sing-along even though you probably won’t understand a word coming from Jonne, if you don’t speak Finnish like I don’t. His singing timbre and pronunciation work absolutely fantastic and give the extra element that makes KORPIKLAANI so easy to identify. I mean, “Pilli On Pajusta Tehty” showcases exactly this, even though it comes too heavy on the accordion having pushed the guitars on the side or in the background. In fact, this is my sole complain about “Noita” having reduced its Metal character as it happens in the otherwise really good and mid-tempo song “Lempo” where the accordion and violin do all the leads leaving the guitars to deliver simple chords in the rhythm section. However, the song’s structure highlights the Folk element on KORPIKLAANI’s music and to some extent reminds me of the late SKYCLAD era, something that works for me. My album pick is the amazing “Sahti” where the lyrics combined with Jonne’s pronunciation give the extra oomph and once the violin/accordion leads have been added will make this a killer Folk song to dance your arse off.

“Minä Näin Vedessä Neidon” changes the mood a little bit with a lower tempo, a rather complex structure and - to my delight - a heavier sound that is highlighted during the violin solo when the guitars get louder in the mix and kind of take hold of the reigns closer to the end. KORPIKLAANI are capable of getting darker and I hope their plan is to do more lie this and get away from the almost single-sided Folk dancing music. The heavier “Kylästä Keväinen Kehto” and the awesome SKYCLAD-esque “Ämmänhauta” (pay close attention to the main melody) will get more listening attention once the more straightforward drinking songs have faded away. Even though the guitars are still in the rhythm section, their louder mix combined with the throatier/harsher singing make the latter song one of the heaviest tunes of the tracklist. “Sen Verran Minäkin Noita” is cut from the same cloth with the previous songs sweetening even more the deal with some guitar leads and faster tempo which makes everything better.

It seems to me that the tracklist of “Noita” was divided in two parts; the Folk-ier and the Metal-er side. The first set of songs are straightforward and focus on the catchy melodies and sing-along choruses (it doesn’t really matter if you cannot speak Finnish), while the second has more complex and heavier songs due to the way the violin/accordion are combined with the distorted guitars. I’d say that “Noita” is fun to listen but at the same time has an unbalanced tracklist which gives the impression that you’re listening two different albums. I hope for the next LP, the Finns will do more music like in the second half of this album...