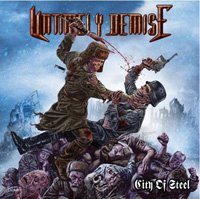 The first thing that came to mind when charging the stereo with UNTIMELY DEMISE’s full length debut “City Of Steel” was CHILDREN OF BODOM. Although they don’t sound very much like the finish bastards, UNTIMELY DEMISE has the same type of melodies in a few songs. They also have that clear and almost a little too perfect way of performing them. That is my problem with some bands today that the production and way of playing is too clear and perfect. Metal must be filthy and aggressive.

UNTIMELY DEMISE though has their other foot deeply rooted in the Bay Area Old School Thrash Scene where especially EXODUS comes to mind. Matt Cuthbertson has the same way of barfing out words as Steve “Zetro” Souza. I guess it depends on what school you’re from too, because my Thrash mind had quite a hard time to find the Death Metal influences in the music. But if you classify ARCH ENEMY or SCAR SYMMETRY and such bands as Death, sure… Similarities to those bands can be found on “City Of Steel”, I would still claim the more melodic parts as Heavy Metal rather than its more brutal brother.

In the middle of the record, the most brutal track of the album “Street Of Vice” starts off with a crushing riff. I really like it when there’s a riff in one direction, a melody that doesn’t really seem to fit and above that a vocal line running the other way but the band manages to keep everything together anyway. And when it sits as tight as it does for UNTIMELY DEMISE it gets magical. “The Unmaker” starts off really soft and melodic but the first appearance is deceptive, it develops into an almost as brutal one as the “Street Of Vice”.

“City Of Steel” hit number one upon release on the Canadian charts. Just as in other countries there’s a bigger chance for a small band to hit the local list. But they absolutely do deserve it. This is a very well played and well written album. The band has the technicality and ability to play this quite complex type of thrash. The production suites the music, it’s clear but still rough and raw. UNTIMELY DEMISE also got some help from guitar demon Glen Drover who’s produced the record. He also has contributed with solos. The diversity on “City Of Steel” and sort of in the middle sound, one foot in modern Metal and the other in Old School as well as the mix of styles on the album should appeal to most Metal fans into Heavy, Thrash and Melodic Death Metal.