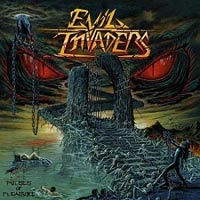 “Evil Invaders” is my favorite RAZOR album and really you cannot go wrong with a name like this! EVIL INVADERS comes from Belgium and has been around for nearly a decade but with a slow portion of offerings since “Pulses Of Pleasure” is the quartet’s debut full-length recording (an EP had also resurfaced in 2013, which was a nice teaser).

Speedy riffs, one after another, is the main dish here: the band performs fast Heavy Metal with a clear inclination towards the '80s Speed Metal style. So, the review could stop somewhere around here, huh... The guys in EVIL INVADERS do not seem to care that much about melody or multi-layered riffage but rather perform fast Metal as if there’s no tomorrow. The vocals are in a love-them-or-hate-them situation as they are high-pitched and screaming, while the rhythm section is hammering and non-stop pounding. Maybe you’ll feel bored after a couple of auditions but that’s not the band’s problem I guess; you’d rather check your link to Speed Metal madness, in other words. There are no fillers here and the band has work hard in the songwriting sector. I, on the other hand, would expect a couple of ‘hits’ that would give the whole album a boost (if you know what I mean), but I’m not by any means feel let down with an album like “Pulses Of Pleasure”.

I hope this album gets out on vinyl too, since I liked it. It’s honest, it’s penned from the heart and the fact that it does not reinvent the wheel does not omit anything from its dignity. The craftsmanship is very good, the tracklist is appropriate for headbanging and I wonder what else would the traditional Speed Metal aficionado could ask for.

Evil Invaders - In For The Kill