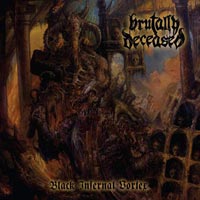 Are you a fan of old school Death Metal? If so, then keep reading, else move on to another album presentation. My first thought when I received BRUTALLY DECEASED’s second full length album “Black Infernal Vortex” was that now all good band names are taken (one can wonder if this should be classified as full-length when it’s just over 30 minutes though). But the name matters less than the music to me, so of course these Czech guys should get the same treatment as any other release. And as a conclusion, I'd say it works because after all they play rather brutal Death Metal, so I guess it fits.

I am a fan of old school Death Metal, mainly from Sweden, and most of the early bands have gone down really well. I would place BRUTALLY DECEASED somewhere in the middle between ENTOMBED (early) and BOLT THROWER to describe their music. Specifically I am talking about the chewy guitar riffs with the Studio Sunlight trademark sound and the rolling force that BOLT THROWER have.

“Devil’s Tarn” strikes hard and I really enjoy the flow of the music and the kind of catchy riff that makes this music a bad idea to listen when you’re driving. “Day Of Darkness” is heavier and a lot mellower but still holds the same brutality while the small guitar harmonies and melodies sound great. The first is almost a bit disharmonic, but it sure works. How can a track called “Black Hammer Of Satan” be bad? It’s not; the heavy and chewy riff strike hard. In this really fast and brutal track, the music almost turn over to Black Metal occasionally and this is nothing that bothers me at all. My favorite track of the album is “Below The Adversary”; the first guitar melody was annoying at first but after a few spins, it really fitted very well. The floating riff that the song is built on is also damn good. This is perhaps one of the more melodic tracks of the album, apart from “Prelude To Deathwish” but since that is just an intro to “Deathwish” which closes the album, it doesn’t really count.

From an originality perspective, BRUTALLY DECEASED doesn’t have much to offer but with this said, “Black Infernal Vortex” is still a very good Death Metal record.