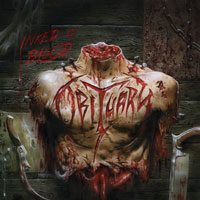 Regardless of your Metal affiliation, I am sure you felt some Death Metal happiness the moment you read that OBITUARY were working on a new album. Indeed, the Florida-based band was working on some old-school rotted Death Metal under the fitting titled “Inked In Blood” that was set to be released five years after “Darkest Day”. This excitement was also reflected by the success of the fundraiser campaign that supported the making of this album and as you understand, the stakes were really high. Add to this that the post-“The End Complete” works were not as good as the first three albums and you’ll understand why all the internet-based fuss created around the new OBITUARY offering .

Door down without any fancy intro and, in fact, it feels amazing having John’s most characteristic growling lifting the curtain for the OBITUARY after-four-years comeback. Yeah, the down-tuned guitars have the old-school type distortion you should be familiar with, especially if you have been following this band for a while. I am sure many will rush to say this sounds pretty much the same but I’d choose to call this ‘a Death Metal-blueprint’. I mean, forget all the fancy stuff and get back to the basics with the deep growling, the pounding double bass drum and the simple yet most effective riffing as served by “Violent By Nature”. I should not forget the Tardy grunts that can be easily considered as an OBITUARY trademark and they are also a powerful reminder of my first steps upon Death Metal territories (along with DEATH of course). In case you have no idea what I am talking about, pay attention to the growling way that follows the drum based opening of “Visions In My Head”; the combination of double-bass drumming and rhythm guitars are perfect for mid-tempo headbanging and keep your fists clenched as John destroys more vocals chords. I have no idea who did the production of “Inked In Blood” but the double-bass drumming sounds awful to me and gives me the (false) impression that comes from a drum machine, but this cannot be the case since the rest of the drums sound real.

Songs that are strong candidates for the upcoming OBITUARY live dates are the fast “Violence” (again the vocals come first), the mid-tempo “Within A Dying Breed” that passes all the Death Metal quality checks with flying colors, and the mosher “Paralyzed With Fear” that sets the tempo at headbanging mode with no questions asked. This one has some really nice guitar leads (especially closer to the end) but still everything would have been way better if the double-bass drum was lower in the mix.

“Inked In Blood” is a powerful statement that OBITUARY are back and I am sure it has already rekindled the interest of many metalheads for this type of back-to-the-basics Death Metal. And if you still cannot believe me, listen at the highest volume the trademark Thrash snare action of “Minds Of The World” and let me know if you don’t feel the urge to jump into the closest mosh-pit...

Obituary @ The Forge, Joliet (US)