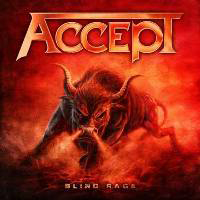 Trying to argue about ACCEPT’s influence on Heavy Metal music in general is like trying to find a pile of beers in a monastery, to say the least. So let’s just focus on the last 4-5 years of the band’s career: yes, the years that led to the reformation of the band with Mark Tornillo (ex-TT QUICK) behind the mic. Two albums were so far the result of this collaboration and the upshot was awesome by all means. Sharp riffs, screaming vocals, major melodies and some really inspired songwriting/craftsmanship led to two albums of stellar acceptance and the verdict was clear: ACCEPT is here to stay and get our balls to the wall, babes!

“Blind Rage” is no exception to the rule. From the angry cover artwork to the songs themselves inside, the result is as desired by the classic Metal fan. The music is 100% Heavy Metal and the production - by Andy Sneap again - does justice to the amplitude and volume needed for all the numbers to take shape and torment you like a typhoon. There’s no need to mention any special track here since all of them have their special meaning and position in the tracklist. There are fast songs, mid-pace bangers and more atmospheric cuts here and they all built an album that’s coherent and intact/integrated. The vocals of Tornillo are mature and experienced but do not imagine he does not scream in awe when challenged. The riffs and leads are blazing again, 'nuff said. The bass is pounding and the drums are relentless and overall the instrumentation is nothing you should worry about...

There’s no need to exaggerate more on “Blind Rage” to justify the grade below. This is the third album in a row after their reformation where ACCEPT (as a band/brand) showcase their special charisma in a creating Heavy Metal music from the heart that stays ageless and timeless. If “Blood Of The Nations” and “Stalingrad” were a nice treat for your ears, then you should definitely invest on this new offering by these German legends.

Accept - The Rise Of Chaos