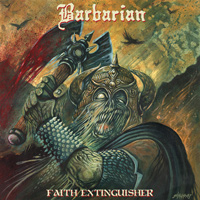 BARBARIAN could have easily carried on raping CELTIC FROST’s vintage heritage without anyone complaining... This comes straight from the press-sheet accompanying BARBARIAN’s new album “Faith Extinguisher” and I cannot but admit that indeed there are many resemblances with the aforementioned band. The raw force and brutal drive that was CELTIC FROST’s trademarks are still there but that’s all these Italic BARBARIANS have ripped off because the songs differ, structure-wise. Also, some hold an almost MOTÖRHEAD-esque kind of drive, like “Godless, Amoral And Proud” or “Total Metal” for example. Although I have to say that the latter is closer to VENOM than it is to MOTÖRHEAD. But let’s get things from the start.

The album starts with the title-track being also a very decent and what really struck me was its riff; I really enjoy the beat, the rhythm and the melody that without any doubt fits the song. The performance here leaves more to wish for, especially as compared to the rest of the tracklist. The tone is so static and dead and is a bit too high in the mix for my taste, but it’s mainly how static it sounds that bugs me - otherwise, I really like the track. The same goes for “Fools Of Golgotha” holding a very cool riff which occasionally turns into something close to the very early RUNNING WILD, same kind of harmonies the German Pirates used back in the days. Perhaps piracy and barbarian wrath isn’t very far apart... The album closes with “We Are The Profane” holding more of a melody but this time it really works. Ok, perhaps it is a more high-pitched riff than a melodic one but it really works, plus its raw feeling fits the rest of the album.

Anyway, I’m just so surprised by this, with most of the melodies, since everything else is so very good. “Faith Extinguisher” is a smack in the face and a true party record and for sure a legacy to past days. So for old school fans, hell yes - for new school, nope... For me, it's a yes!