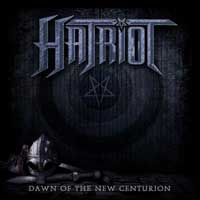 It feels that the paint on the HATRIOT full length debut has not yet dried but still the Zetro-fronted band strikes back with a new album, entitled “Dawn Of The New Centurion”. Ok, I may overstating things because Steve in a recent interview told METAL KAOZ that since the band was not as busy as he was expecting (doing live shows that is) he got everyone into writing mode, and judging by how much my neck is hurting, he did well, so let me tell you why.

The album opens the Bay Area Thrash treasure box after the famous excerpt from Charlton Heston’s speech (when he has president of NRA) that climaxes with the words that also constitute the title of this song. Sure, the lyrics touch an ongoing debate about guns, so I expect to see some reaction in the internet forums where the freedom of speech is usually getting lost but no matter your affiliation, you should always appreciate lyrics with opinion because they can be food for thought. Aside from the lyrics, “From My Cold Dead Hands” shines via all the virtues of the US Thrash and that is nothing less than cutting edge riffs, headbanging groove and, on top of everything, the characteristic singing by Mr Souza. The lyrics are painted with anger, hate and passion, so they sound 100% alive and kicking delivering an attitude that is sadly missing from most of the 80s reviving bands. I mean, there are a lot of ways to copy the 80s era when it comes to music and the overall sound, but there is no way to reproduce the in-your-face attitude that gave birth to the Bay Area scene. Kosta has worked more on the guitar leads while there is a lot of improvement in the bass/drums section meeting all the Thrash requirements. If you want to hear how this lineup has improved, then check the seven minutes of “The Fear Within”; the slow start with the killer high-hat action and the powerful bass quickly build the tension as the double-bass drum kick in before being followed by another hard-to-not-headbang riff. The chorus is groovy and extremely addictive, so I am expecting to see a lot of mosh-pit action during this one. Somewhere in the middle of the song there is a slow break with acoustic guitar arpeggios and clean vocals changing the entire atmosphere but without losing at all the overall heaviness. It seems to me that the band wanted to push a little more the envelope and go beyond the Bay Area Thrash stereotypes that one would expect from a young lineup (ok, aside Steve). The EXODUS vibe kicks the door down with the massive rhythm guitars sound in “Superkillafragsadisticactsaresoatrocious” (articulating this one is quite a challenge) and despite the mid-tempo, the song is full of attitude oozing anger as it drops the curtain with another statement regarding the controversial Russian band PUSSY RIOT. In pretty much the same pissed-off wavelength is my personal favorite “Silence In The House Of The Lord” where Steve deals with the men of the cloth who are doing everything except from following the words they are preaching (and yes, I totally agree with the term ‘plague’ used here).

Indeed, HATRIOT have taken a lot of steps in the forward direction and have rightfully given more air-time to the guitar solos department as compared to the band’s debut. Beyond a shadow of a doubt “Dawn Of The New Centurion” is a killer addition to your Thrash collection, being delivered by a voice that has a lot to offer and I hope a full US tour will soon follow.

01. From My Cold Dead Hands
02. Your Worst Enemy
03. The Fear Within
04. Honor The Rise And Fall
05. Superkillafragsadisticactsaresoatrocious
06. Silence In The House Of The Lord
07. World Funeral
08. Dawn Of The New Centurion
09. Consolation For The Insane