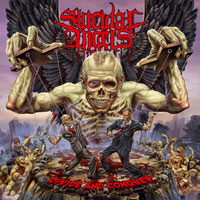 Greece’s SUICIDAL ANGELS is one of the most hardworking bands around the Thrash Metal scene. During their ten years of existence, these guys have released no less than five full-length CDs, plus a couple of EPs, making this outfit a sweat-n-work camp that has lots to offer. Now relocating outside Greece in order to stand in the forefront of the musical exploitations, SUICIDAL ANGELS offer their latest disc, entitled “Divide And Conquer”.

Many fans may find this offering strong and powerful but my opinion is kinda different. What this release lacks is the “evil” side of the band as seen in their previous releases, plus a huge production to back the musical content. To expand: “Divide And Conquer” seems to be some kind of a ‘politics’ album the same way e.g. KREATOR has done in their recent past – I’m talking about the lyrics and the overall atmosphere here – and therefore there’s little space for some more darkened Thrash Metal in the album, while this is something the Greek band has sufficiently succeeded in during their previous albums. In addition, the production is too plastic and omits a lot off the songs’ malice, making this CD sounding like a disc made for the mainstream audience (I hope the vinyl issue will showcase more volume). The songs themselves are not bad, not bad at all, but the absence of a couple of more dynamic anthems does not finally become an advantage for the album’s capacity.

Don’t get me wrong, “Divide And Conquer” is a well-crafted creation and SUICIDAL ANGELS still perform straightforward Thrash Metal with a strong foot on the glorious 80s Thrash Metal scene. I was just hoping the band would have retained its malicious atmosphere and more violent attitude to say the least. I have all of their albums and will also buy this one, I won’t lie. I only hope it will finally grow inside me as a winner. Still, for the time being...