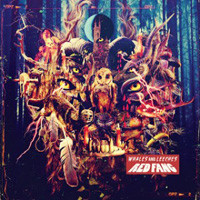 The last five years or so RED FANG have managed to create a strong hype around their name and this is my excuse for not dealing with them in the past. Plus, the Stoner/Sludge scene is currently flooded with new bands and albums, so I am always skeptic when a new name shows up to claim a slice of this success. In other words, following trends was never my thing even though there is always the possibility of missing something good. Having said that I‘ll admit that I ignored my dislike to trends (this doesn’t happen much) because “Whales And Leeches” has a lot to offer.

The first thing that hits you right in your face as “DOEN” opens the album is the solid guitar section and the groovy hooks following the nowadays Stoner requirements. Yeah, RED FANG know exactly what they’re doing; this song is up-tempo, driving and foot-tapping all the way (it’s good for headbanging too). The almost Sludge-y production adds heaviness to the overall sound and I think references to MASTODON or BARONESS are in order. The flat almost shouting vocals fit perfectly to the highly energetic Stoner Rock that will make you move before the end of this song. The guitar solo adds a Blues Rock flavor that to my ears makes RED FANG more interesting. The CLUTCH-touching “Blood Like Cream” sounds more appealing and I think showcases the band’s intentions to push the envelope further to make the music more diverse and interesting than the average Stoner Rock album.

After the first half of the album with fast and in-your-face tracks, one would expect to see his listening interest fading away but the atmospheric “Dawn Rising” has a different opinion. The double-singing profile and the BLACK SABBATH-esque bass lines stir things up and add an almost evil layer on top of the dark feeling coming from the almost guttural vocals and the awesome finishing touch with the effects and the guitar space-y sounds. The bass-driven “Failure” continues on the same Doom and atmospheric path diverting for a while the listener’s interest from the groovy and rather simply structured faster compositions. “1516” takes the foot off the brakes accelerating the tempo before letting the ALICE IN CHAINS-influenced vocal harmonies and psychedelic effects of “Every Little Twist” to close the album on a high and definitely interesting note.

I think “Whales And Leeches” deserves more spins to reveal its full potential pushing the faster tracks off the limelight while pleasing the interest of those in search for something special to add in their daily playlist. I totally agree with those who think that this is the best RED FANG album so far and I will add there are strong indications that this band will evolve even more in the near future.