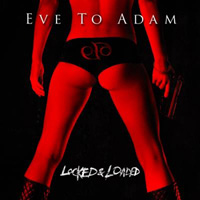 EVE TO ADAM is a relatively young band that has already released five albums with “Locked & Loaded” been the most recent. The band’s name and album’s cover artwork are enough evidence to place EVE TO ADAM under the modern US Hard Rock category and I am talking about the BUCKCHERRY, SIXX:AM or PAPA ROACH type that most of the metalheads (especial the old ones) have an extremely rough time swallowing down. Still, there are some albums that manage to slip through the cracks and appear on a metalhead's playlist, simply because it can sound good, especially on Friday night when the mood need a push to go on higher gear.

Indeed, “Locked & Loaded” works like an adrenaline pill able to upgrade your mood and – why not? – make you sing along a couple of lyrics here and there. And this is because EVE TO ADAM have created groovy songs spearheaded by Taki’s characteristic singing that works great on both heavy and mellow music parts. He has the perfect pitch and singing range for this type of music, so again I will mention BUCKCHERRY and PAPA ROACH as the most representative points of reference. Songs like “Immortal” and “Straitjacket Supermodel” are destined to be hit songs and it is not a big surprise that those two were chosen for music videos. “Fortune Teller” is probably the heaviest track of the album and honestly it sounds to me that the band could do better on this path, leaving on the side the hit-to-be songs. The same applies to “With The Truth” and if you crank the volume up, you’ll enjoy the powerful production where the rhythm section has the space to shine with the bass being on the spotlight.

Like I said, this album will have a difficult time cracking the tough shell of metalheads but I think has already created quite a following in the younger US audience, something that is absolutely deserved considering the level of work EVE TO ADAM have added to “Locked & Loaded”. By the way, “Forgive” is equally powerful with the album’s hit-song, so it drops the curtain with a bang (there is a pinch of SLIPKNOT near the end and I am not kidding).