Cult Of The Fox - Angelsbane 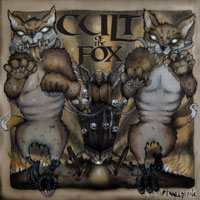 I feel a strange type of bliss whenever a band bounces back with a second album as a follow up to a very good debut one. You see, debut albums are so special since it features the band’s hard work and passion packed in a series of songs whereas the sophomore release – most of the times – gets created in a hurry in order to maintain the same momentum. But this is not the case with Sweden’s CULT OF THE FOX that really took their time and almost two years after 2011’s “A Vow Of Vengeance” debut are back in discography with their sophomore effort. I guess this is the proper way to do things because the first couple of albums are what musically defines a band and it’s extremely to erase/change things afterwards.

Sure, CULT OF THE FOX walk on the same path with “A Vow Of Vengeance” but I think with more confidence on the song-writing. The band’s music ID still writes traditional Heavy Metal and this means guitar-driven songs, epic vocals melodies and occasionally galloping rhythm section. The album opens with the mid-paced but solid-heavy self-titled song that honestly brought an almost HALLOWS EVE taste in my mouth. And that is good news at least for me! Magnus Hultman’s harsh and most of the times low register points towards the same direction until the double guitar harmonies put the term traditional on the side of CULT OF THE FOX’s Heavy Metal. “Nine Ones” speed things up and I think this could be a better album-opener in terms of catching your attention right off the bat with the headbanging groove, the catchy main riff and the sing-along chorus. Yeah, this is really good stuff and I have to give extra kudos to the Swedes for not sounding retro but something genuine old-school. I really love the second and slightly faster part with the fat-guitar rhythm and the double bass drum fills (if that’s a valid description). The bass opens the epic “Rising Flames” (I almost got “Heaven And Hell” chill during the intro) that also features a MANILLA ROAD-esque solo something that surely appeal to all those true metalheads who have a sweet tooth for such guitar action. “Black Magic” may be hiding some Swedish Doom aesthetics shining via the mid-tempo chord progressions and the slower break with evil sounding spoken lyrics, while “My Wrath Unleashed” welcomes some headbanging time exploding with the fast double bass drumming and followed by the galloping guitars, awesome stuff.

Having listened to this album for quite a while I think it’s safe to say that CULT OF THE FOX have improved their songwriting and consequently have made one more step forward from “A Vow Of Vengeance”. I am sure things will become even better since the live performances will help the Swedes to fine-tune their music and establish a personal sound, able to distinguish them from the pile of young bands that is getting bigger and bigger every day.

Cult Of The Fox - A Vow Of Vengeance